David Bedford and the genus Xanthorrhoea 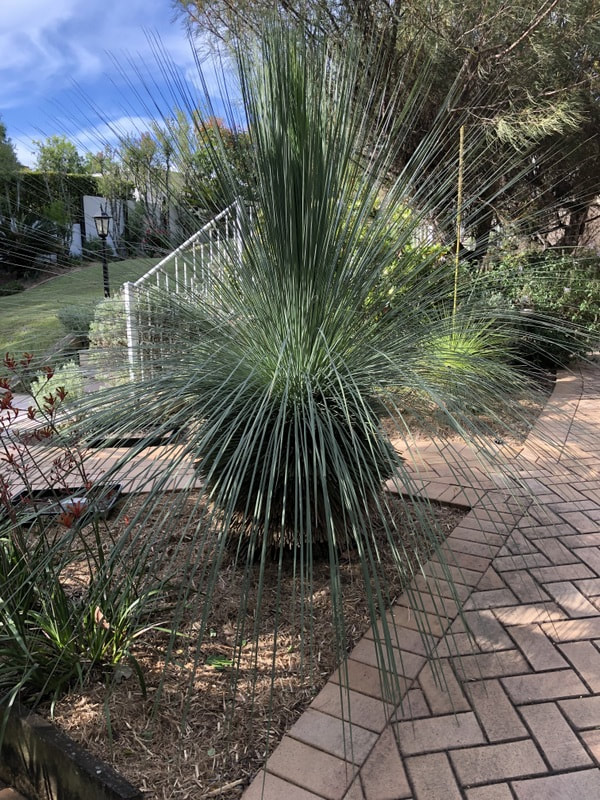 Many people have an interest in growing xanthorrhoeas in their gardens. It is best to grow your own plants from seeds.  The survival rate of nursery-bought plants that have been transplanted from bushland is disappointingly poor. Xanthorrhoeas do not take well to being transplanted. They have a wide and shallow root system and do not readily grow new roots when their root system is disturbed. Because they can store a lot of food reserves in their trunks it often takes at least three or four years before they die.  That means the garden owner often blames themselves for the loss rather than understanding the real cause was the transplanting process.

It is very easy to grow xanthorrhoeas from seed and there is a high survival rate for such seedlings.  My garden in Brisbane includes many quite mature-looking xanthorrhoeas that I have grown from seed and that have flowered numerous times in the 14 years since I first planted the seed.
​
One of the first considerations for growing your own plants is to choose species that would have grown naturally in your area as these will perform better than species that evolved for quite different climatic conditions.

In 2004 I sowed the seed that has grown into the sizeable Xanthorrhoea glauca subsp. glauca shown at the left in a garden setting. A smaller Xanthorrhoea johnsonii​ can be seen flowering in the background (Photo: D. Bedford)

Another issue is what you are trying to achieve.  Some xanthorrhoea species never develop aerial trunks and remain a clump of leaves at ground level.  Some of those species can, however, have very beautiful flowers so should not be automatically overlooked for the garden.  Such species include Xanthorrhoea macronema in NSW and south-east Queensland, Xanthorrhoea gracilis in Western Australia and Xanthorrhoea minor subspecies lutea in southern NSW and Victoria.

If what you are seeking to achieve is a larger and more structural element in your garden then you will naturally choose one of the species that develops a trunk more quickly than others do.  For example, Xanthorrhoea glauca subspecies glauca in south-east Queensland and Northern NSW has been found to grow quite quickly and will develop a short trunk and large leaf crown in ten to twelve years (see photo).  Other candidates should be chosen from species that can be seen to have large leaf bases and will vary with your location.  In Northern NSW another suitable species would be Xanthorrhoea malacophylla, whereas around Sydney  Xanthorrhoea arborea would be a good candidate.  In Victoria and Tasmania Xanthorrhoea australis should produce a trunk relatively quickly whereas in South Australia Xanthorrhoea semiplana would be the most obvious.  In Perth and south-western Western Australia Xanthorrhoea preissi is a species that develops large trunks.  To the north of Perth, Xanthorrhoea acanthostacha may be suitable for gardens.

Most xanthorrhoeas produce very many seeds at a time.  You should always check your local laws and regulations before collecting seed as it is illegal in some areas such as National Parks.  Once you have found somewhere that it is legal to collect, such as private property (with the owners permission of course) or the roadside reserves in some states and territories (not legal in Western Australia I understand) you need to wait until the plants have finished flowering, the fruit have developed, turned brown and opened.  That process takes a few months so it is a good idea to check regularly.

The best way that I have found to collect  seeds is by putting a sheet (and old white bedsheet works well) adjacent to the fruiting spike and giving the spike a tap in the direction of the sheet.  A rain of the flattish black seeds results.  Please do not take more than you need.

It is best to keep the seed in paper bags. Write the species name and collection location and date on the bag.  The seed can be stored for a few months but viability begins to fail if kept too long.

Unlike the proven practice for many other plant species I have found that it is best to germinate single seeds in a large 200 mm to 250 mm pot in which the plant can be grown for a couple of years before planting out.  The reasons for this are that Xanthorrhoea seedlings develop large root systems that do not survive well if disturbed.  Also, the roots are contractile, they pull the growing point of the plant down below the soil surface, so it is best to give them lots of room if you want the healthiest plants.  Most species of Xanthorrhoeas prefer well-drained conditions so I have found that a good potting mix is 50% soil mix and 50% coarse river sand.  Place the seeds just under the surface, not too deep or they will not germinate.  Seeds germinate within a couple of weeks.  Water them regularly, with one exception (xanthorrhoea thorntonii) xanthorrhoeas are not low-rainfall/desert plants and like to be well watered, though never waterlogged.